Back in the day, in the not so distant past, the riding of scooters in a store was reserved for those that were, well, a little long in the tooth– the sweet little old person riding around trying to lead a normal life as they go through the aging process. 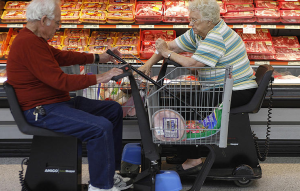 “Oopsie, I think we are tangled.”

However, riding a scooter in a store looks a little different these days. It is no longer just a way for the elderly with their aching bones and various ailments to still enjoy the freedom of doing their own shopping, sweet, simple, easily understood, and accepted by the walking public.

The population we expect to see riding a scooter has taken a drastic shift to a crew that looks nothing like the sweetness you see here in this picture.

In fact, I rarely see this kind of “sit and shopper” anymore because those that now fill the seats of these way too convenient “sludgemobiles” are anything but old.

It seems as though a portion of the general public has chosen to cast aside reason and use these scooters to avoid the possibility of burning a calorie or two, to cease using their legs to move, and to have one more opportunity to take something they don’t really need but think they deserve.

When I see the new scooter crew, I am left with the feeling that our society has simply given up.

Does anybody care anymore?

“I’ll put on a shirt, but I draw the line at buttoning it.”

When did getting your groceries or tooling around Wal-Mart become a sport of dodge the scooter? Nothing says “Drive me!” more than a 40 foot line of back to back scooters just there for the taking.  It’s as if the stores just said, “Screw it! People are going to use them anyway; we might as well make it convenient.”

I mean why walk when you’ve got to buy milk when you can sit and steer as though you never left the comfort of your own Lazy Boy.

Apparently walking has become as outdated as twister beads and hairstyles from the eighties.

I truly understand that some people need this option of motility, and I praise them for choosing to use it (fully clothed) in order to be out and about and to remain independent instead of calling on others to do things that with the use of the scooter they can do themselves.

But, I have the sneaking suspicion that not all scooter operators are relying on the scooter because that is their only option.

I am a fast walker–faster than most. It’s what I do. It’s not to make anyone uncomfortable or feel slow. It is just how I’m wired. I can not walk slow. I feel as though I will actually come out of my skin if I have to walk at a slow or even normal pace. What is the point? I need to get somewhere; I’ve got two legs to get me there. If I can go from point A to point B fast, then I have time to do more things, or I will have quickly finished the things I didn’t want to do in the first place.

When shopping for groceries or making a quick Wal-Mart run, it is typically after work when I am exhausted, and my feet are desperately wanting to ditch the beautiful pair of heels that were awesome ten hours ago but now feel like two piranhas eating their first meal of the day.

The scooter has put a whole new kink in that “get in get out” plan of mine, and the population driving them has gotten quite an attitude to go along with their new means of transportation.

They’re in no hurry. It’s as if time has stopped when walking behind one of those scooters.  Let’s face it–they don’t care about anything going around them…clearly.

Who needs a scooter?

I’m sure, from their point of view, I am the one inconveniencing them.

After all, they had to work hard to press their thumb on that little button to make it stop since I was in their way. And, good Lord I’ve actually had meat thaw watching one of those suckers turn around. I can actually feel my fingernails growing waiting for them to make that three-point turn. And don’t get me started on the wide-load back-up siren that goes off when they reverse.

They could have actually gotten all of their stuff paid for and headed out to the car in the time it took them to go three feet down the aisle–but whose looking at time.

I’m wondering about the prerequisites of the new crew operating these scooters under the false pretense that they need one:

2. Have ZERO urgency to do ANYTHING.

I love rounding a corner on two wheels to abruptly be met with one of those little scooters slowly (mind numbingly slow) rolling down the middle of the aisle. That’s right the middle. Because apparently when you get on a scooter you abandon everything you ever knew about traffic laws. Why would I ride to the right side when I’ve got this whole aisle? Why wouldn’t I stop right in the center of the aisle? I’m operating a scooter.

And how about when you get to become someone’s personal shopper as they scoot up beside you and ask if you would get that whatever from the shelf a half-inch above their head?

I would hate for them to test the waters and actually see what standing up to get that item would do to them. I mean they had to do it to get in and out of the car, walk to the store, and choose the working scooter positioned in the easiest place to pull out, BUT to stand–to stand I say–and get something off the shelf themselves? Now that might just give people the notion to believe that they are perfectly capable, and we wouldn’t want to do that now would we?

Any feelings on the subject? Have you had any funny experiences involving the new scooter crew?

I am a middle school teacher juggling career, husband (ooh la la), and twin tomboys (good grief). I have a passion for writing and crave laughter just about as much as frozen yogurt. This is my attempt at sharing the madness of my world, my mind, and my humor. END_OF_DOCUMENT_TOKEN_TO_BE_REPLACED
This entry was posted on Thursday, June 4th, 2015 at 10:34 pm and tagged with Elderly, Mobility scooter, Wal-mart and posted in Uncategorized. You can follow any responses to this entry through the RSS 2.0 feed.
« Two Girls, One Night to Remember
The Man That Makes a Father »

6 responses to “Walk or Scoot?”

Godinterest is dedicated to proclaiming Christ and set apart, to save and empower lives.